If you’re an advanced player, this means that you are already PLAYING either national or international events, and this also means that you need a best tennis racquet that can handle the enormous demands of your game

I’ve sourced several of the top advanced racquets on the market today, SEVERAL of which I have used myself over the years, and I am confident that they will serve you well on your own career path.

To see my list of recommendations, simply read on!

Allow me to introduce to you, the beast of all BEASTS.

As the legend has it, if you can tame this racquet you will wield power like never before – and I can confirm that this is TRUE.

I’ve used this racquet during my college playing days, but let me tell you, you need to have some serious wrist strength to last for several sets with this frame.

But when you catch the ball in the SWEET SPOT with the Head Prestige MP, my word, the ball absolutely flies.

It is a very stiff frame, however, so it won’t appeal to everybody.

If you are physically quite strong and love to hit with pace from the baseline, this racquet is ideal! 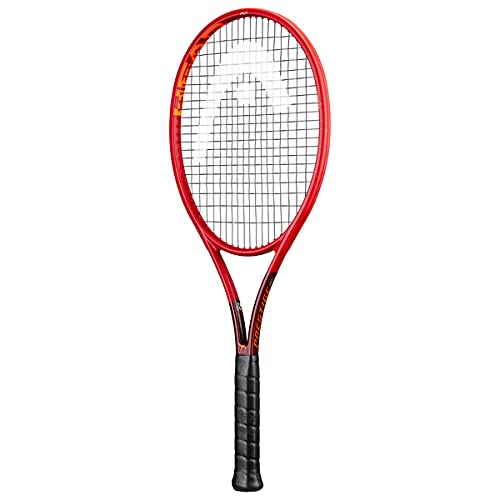 This is the frame of choice for a certain Mr. Federer, who doesn’t really need an introduction.

He’s used a very similar frame for his ENTIRE career, and he’s racked up a grand total of 20 Grand Slams in his time.

Of course, this isn’t purely down to the racquet at all, but it certainly helps. This racquet carries considerable weight and has a very small sweet spot, but catch it right and you may find yourself emulating the GOAT!

Well, we can always hope! It’s important to note here that Federer has EFFORTLESSLY swings that require very little physical exertion on his part, which is why he is able to wield such a heavy stick.

We don’t all have this ability, so it’s important to keep this in mind.

If you are a fan of Roger Federer, or you’d just like to understand a little bit more about this racquet and why Federer is so passionate about it, I would recommend that you watch the video link below.

You can see how this racquet impacted Federer’s game, straight from the horse’s mouth, and it really does give a real glimpse into why this racquet is so good. 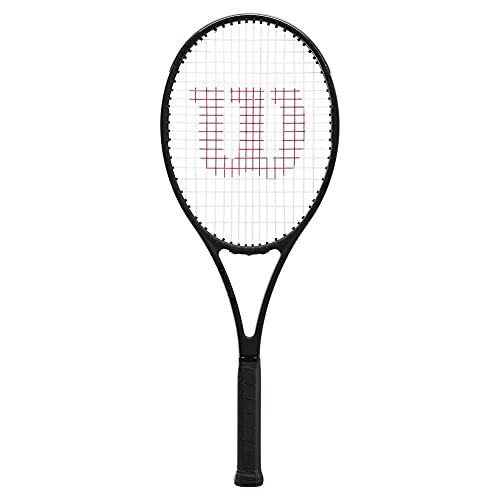 While the previous frame was the racquet of choice for the long-standing legend, Roger Federer, this frame is the choice of the up and coming legend – Danil Medvedev.

This is actually the only Tecnifibre frame that I have listed so far, but this frame is one of the greatest racquets out there for advanced players.

It’s relatively heavy, has a decent sized sweet spot, and it’s great if you like to build points from the baseline, much like Medvedev.

I have used other Tecnifibre frames before, but not this one. With that said, I’ve had practice sessions with players using this frame and they all spoke very highly of it.

This is another reason why this racquet is receiving my approval.

Before we check out the key features and specifications for this frame, take a look at why Medvedev is using this frame as well as further information about the racquet right here:

It would seem that the top players know something that us mere mortals don’t since there is another racquet used by a top-level player – Novak Djokovic.

But please don’t get the wrong idea and think that these racquets will work WONDERS!

Yes, they are great frames, but they are often very heavy and have small sweet spots, so they truly are just for advanced players.

Advanced in this sense symbolizes that you are either at tournament level or above, and I don’t mean just small-time tournaments.

You need to be complete as a player to use this frame, and all your fundamental strokes must be in place.

This is a very similar model to the Ezone 100, but the difference is that the head size is 2 inches smaller than the previously mentioned frame.

I believe that this is a GREAT racquet, which is why the model has received two listings so far.

In my opinion, Yonex is making a really valiant effort for contending in the tennis racquet industry.

For years it has been dominated by huge brands like Wilson and Babolat, but the Yonex frames are truly crafted with care and quality.

Oh, and I almost didn’t mention the most important factor – the incredibly talented Nick Kyrgios uses this racquet. 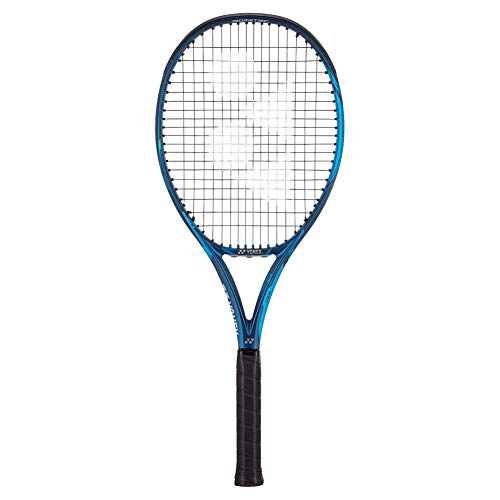 Like many of my recommended racquets for these categories, it is only NATURAL that some may compliment your game style, and some may not.

If you’re already a 6ft tall and physically strong player, then it doesn’t make sense to choose a powerful racquet.

If you’re 5ft tall and struggling with physical strength, then of course it does not make sense.

Be SMART about it, and seek out racquets that will compliment your game rather than hindering it.

I hope that one of these racquets mentioned above will fit the bill for you, and I’d love to hear about your experience in the comments below.