Sometimes the best baseball books are fictional books that are not a true story but usually written as something that DEFINITELY COULD HAVE HAPPENED.

Some of the best books of all time are FRICTIONAL.

These books can go outside the box a little and create a fascinating story that is compelling to read.

Fictional books are wonderful because they can go outside the normal realm FOR WHAT IS POSSIBLE.

Though usually with fictional baseball books, they are still realistic and reasonable.

Although not always, you will definitely find some stories that are outside the normal box of thinking and that is wonderful too!

There have been many fictional baseball books written over the years.

Some have been great and some not so great.

So which fictional baseball book would I recommend?

My favorite fictional baseball book story I have ever read or heard is Shoeless Joe.

Many of you may already be somewhat familiar with the “Field of Dreams”.

If you are not, I highly recommend that you read Shoeless Joe, written by W.P. Kinsella.

If you just mention the famous line “If you build it, they will come”, many sports fans, not just baseball fans know what you are referencing.

This book is legendary and many non-sports fans have read it as well.

Of course, like many great books, there was also a movie made about the book.

There are even some real life tie-ins to the story.

The entire story is incredible, I cannot understate that. I highly recommend that any baseball fan read Shoeless Joe.

With how many have been written, that is MONUMENTAL.

Shoeless Joe has inspired many baseball fans and players over the years and I hope it can inspire you also.

Here is a movie trailer about the movie, Eight Men Out, released in 1988.

Another popular movie about the book, and even more well-known than Eight Men Out, is the movie Field of Dreams.

I have seen Field of Dreams many times and it never seems to get old.

The movie is also very well produced and features many famous actors.

The movie is a great portrayal of the book and very well-liked among baseball fans.

Kevin Costner, the main actor really does a great job.

Baseball movie fans will recognize Costner as many of his movies feature a baseball theme.

Recommendation For You – Shoeless Joe by W.P. Kinsella 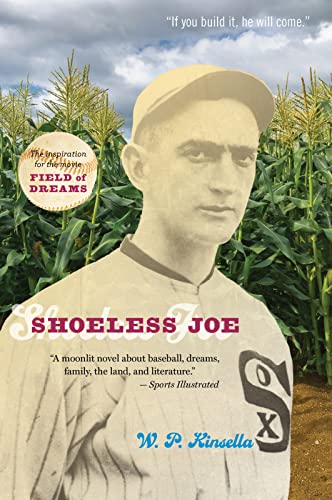 In fact, Shoeless Joe is so popular that the MLB even recently announced that a baseball game is going to be played at the “Field of Dreams”.

I think this is a really cool gesture by Major League Baseball. I know I will try and tune in when the game is on.

The game will be played in Dyersville, Iowa between the Chicago White Sox and the New York Yankees.

A game has never been played there and they are constructing a stadium just for this game.

Here is a movie trailer for the popular movie, Field of Dreams.